16 Room House is one of a number of ruins located near the San Juan River in the area around Bluff and Mexican Hat, Utah. Many of these ruins are only accessible from the river. 16 Room House is an exception – you can get to it by driving county roads. 16 Room House is not a large ruin or especially well preserved, but it is an interesting Pueblo III, Mesa Verdean style ruin. As is typical of many Pueblo III ruins, 16 Room House seems to have a very “defensive” nature.

A Ruin With Many Names

For the sake of this article I’m using the name 16 Room House as it’s the oldest name that I’ve encountered. In 1896 a large group of people gathered at the site and posed for a photo. The caption to the photo calls the ruin 16 Room House so that is what I am using here. If you are interested, view the 1896 photo of 16 Room House

16 Room House is located southeast of Bluff, UT on the south side of the San Juan River in a large alcove facing north overlooking the flatlands adjacent to the river. Although most ruins face south to take advantage of sunshine in the winter, 16 Room faces north. This provides good shade in the summer but does not provide any solar heating in the winter months. However, in such a perfectly sized alcove, it’s not surprising to find ruins. The alcove has just a single long ledge and the structures were built along the back of the alcove in a single row.

It used to be quite easy to visit 16 Room House if you were near Bluff, UT. A little east of Bluff on Highway 162 there was a swinging foot bridge that connected the two sides of the river. Built in 1957, the bridge served as the primary connection between the schools, stores and health care in Bluff on the north side of the river with the Navajo reservation located on the south side of the river. The bridge provided easy access in both directions and was widely used by residents of both sides. Unfortunately, the bridge was washed away in a major flood in 2007.

16 Mile Ruin is very close to the south end of the bridge crossing. In fact, to visit the ruin today you drive there on Foot Bridge Road. When the bridge was in place a visit to the ruin was highly recommended to any visitor to the area. However, since the destruction of the foot bridge, far fewer people visit the ruin. Fortunately, it’s easy to get to the ruin by driving county roads that are suitable to any type of vehicle (assuming normal road and weather conditions).

!6 Room House is on Navajo Nation land and a recreational use permit is required. Permits are mandatory for any non-Navajos who are hiking or camping on tribal lands. Camping, hiking and backcountry permits are issued by the Navajo Parks and Recreation Department or other duly delegated tribal authority. Failure to have a permit is considered Trespassing on a Federal Indian Reservation.

Permits fees are $12.00 per person per day (as of 2020 subject to change). Please read and understand all of the Navajo Nation regulations and obey all rules. Learn more about the Navajo Nation Backcountry Permits including contact info.

16 Room House is reached by taking US 191 south from its junction with US 163 about 2 miles west of Bluff. The junction is just west of the Sand Island Petroglyph Panel located at the major river access site and campground. Turn south onto 191 at the junction and you will immediately cross the San Juan River. When you cross the river you enter the Navajo Nation, a 27,673 square mile area of sovereign land that covers parts of Arizona, Utah and New Mexico.

Continue south on US 191 for several miles while looking for either County Road 441 or County Road 438. Each of these roads is on the east side of the highway. 441 is the first road you will encounter when driving south on 191. It’s a maintained gravel road that provides the shortest access to the ruin. However, County Road 438 is paved and the pavement lasts for more than half the distance to the ruin.

County Road 438 actually takes you right to the ruin. About 4.7 miles from the ruin there is an intersection where 438 and 441 cross. At this point, 438 is running north/south and 441 is running east/west. 438 is paved to the south while the roads are gravel in the other three directions. If you have come from US 191 on 438 it is about 7.8 miles from 191. At this intersection head north on 438 for about 3 miles staying to the right until the road drops down to the river bottom. At this point the road has several names. Depending on the map you use it is County Road 438, Navajo Route 5061 or South Footbridge Road. From here it’s a short drive to the base of the large alcove. A good map is helpful and I recommend the DeLorme Atlas & Gazetteer: Utah.

Once you’ve driven to 16 Room House Ruin it’s easy to access the structures. The trail is very obvious and heads almost straight up to the ruin. The ruin stretches along the back of the alcove in a long single row with access trails on each side of the alcove. Although the trail is short, it’s steep and can be a very slick in some conditions so take care with your footing.

The lower section of the alcove is blanketed by a vast field of wild columbines. If you visit in spring or early summer you’ll delight in the beautiful flowers that are like a carpet on the ground. While it’s not unusual to find columbine flowers in the Four Corners area, it’s unusual to find this many in one huge patch.

Once you’ve climbed into the alcove, access to the ruin is easy and obvious. There is a gap near the center of the room block where you can climb up onto the ledge to view the rooms in each direction. This is a very skinny ledge and the ruins occupy all of the space between the edge of the ledge and the back wall. The Ancestral Puebloans surely moved both through and on top of the rooms. However, today we can only look at the crumbled walls and imagine what the ruin was once like.

At one time there were three or four sets of rooms to the east (left as you face the ruin) that were two story buildings. They all had roof entrances as well as connecting doorways on the second floor. To the west (right) were 9 single story rooms that had only roof entrances. Many of these rooms have peep holes in their walls facing the river.

While there are no kivas at 16 Room House, there is a fire pit chipped into the floor of the lower level room in the two story block. It’s been reported that this large room served the same function as a kiva. However, I have not seen any confirmation of this.

If you choose to visit 16 Room House, please take the utmost care. It’s possible to enter the room blocks without climbing over any walls or ruins. Once you are in the room block you can step over some of the room walls to explore the rooms. However, to get into some of the rooms you have to climb on the walls DON’T DO THIS! If you’re at a place where you can’t access the next room without actually putting your weight on a rock or rock wall, don’t do it. The rooms you will see our the same as the one you are in, and the only way we can ensure that these ruins will last into the future is if we all refrain from ever touching them climbing on them or putting our weight on them in any way.

16 mile ruin sits above a broad, flat and fertile river bottom land that is farmed today and must have been extensively farmed by the Anasazi. Gazing out from 16 Room House it’s easy to imagine the view not being different from that of the ancients.

It’s hard to find much information about the 16 Room House. The only book I know of that has info is: The Anasazi of Mesa Verde and the Four Corners

While you are here

If you visit 16 Room House you’ll be very close to the Sand Island Petroglyph Panel. This is a great place to view the rock art that the Ancestral Puebloans are famous for. It’s right on Hwy 191 and visiting it really worth the time. 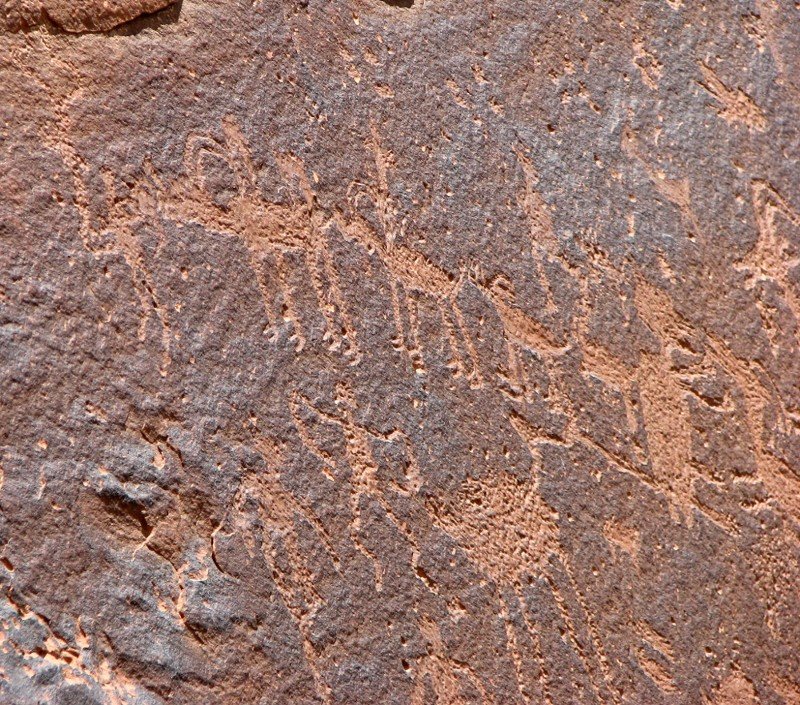