The Mule Canyon Ruin, also known as the Mule Canyon Indian Ruin, is a fully developed and restored Ancestral Puebloan (Anasazi) ruin located on Utah 95, southwest of Blanding, UT. Utah 95 is a primary route through SE Utah’s canyon country and even hurried travelers can get a better understanding of the area and its earliest inhabitants by visiting.

A Quick Stop On Highway 95

Mule Canyon Ruin is on the north side of UT 95 and the access is very well signed. The turn is at about mile 101 and the paved access road runs a short distance to a large parking area. The path to the ruin is paved and handicap accessible. The well-developed ruin is right off the end of the parking area. Although there is no water available, there are well-maintained vault toilets.

The hike around the ruin is short and quick making this a perfect “quick stop” place to stretch your legs while driving through. The Vault toilets are the only facilities for many miles so that’s another reason to stop.

The ruin was first stabilized and developed when Utah 95 was constructed and in 1973 archaeologists excavated the site and restored it to today’s condition. Mule Canyon Ruin is a good example of the “Unit Pueblo” type of village layout that was common among Pueblo II & III Anasazi.

A “Unit Pueblo” consisted of an L-shaped block of rooms forming the north end of the compound with a kiva located to the south of the room block. At Mule Canyon Ruin this layout is obvious but differs in that there was also a tower located at this ruin.

Sometime around A.D. 750, a pithouse was built on this site as part of a presumed Pueblo I occupation. However, the site was abandoned for many years until it was re-established in about 1000 and was actively occupied until about 1150. The room block of 12 rooms likely was home to 2 or 3 families. Some of the rooms had doorways but the main entrances were roof entrances. The single-story rooms at the Mule Canyon Ruin likely shared a roof area that was an extended patio for the village.

Although it is west of Comb Ridge and in the area where Kayenta influence is strong, Mule Canyon Ruin is Mesa Verde influenced. The kiva was connected to both the tower and the room block by tunnels. We’ll never know if these tunnels were for access, ceremony, or other uses but tunnels are not common in this area.

The base of the tower has been restored and is situated just south of the kiva. This was a two-story tower and its exact use is unknown. It could have been used for storage or defense. However, the tunnel connecting it to the kiva suggests it may have had ceremonial value. It’s likely that at least part of its role was observation and communication as the tower had a direct line-of-sight to the Cave Canyon Tower Ruins about a mile to the south. The Cave Tower Ruin is a large site and these neighbors surely interacted closely

In summary, Mule Canyon Ruin is an interesting roadside attraction. It’s handicap accessible and the trail can be walked by almost anyone. There is an interesting interpretive sign and it provides a great example of a “Unit Pueblo”. It’s well worth the time for a quick visit. If you are traveling Utah 95 this is a recommended stop.

While you are in the area check out these other short hikes: 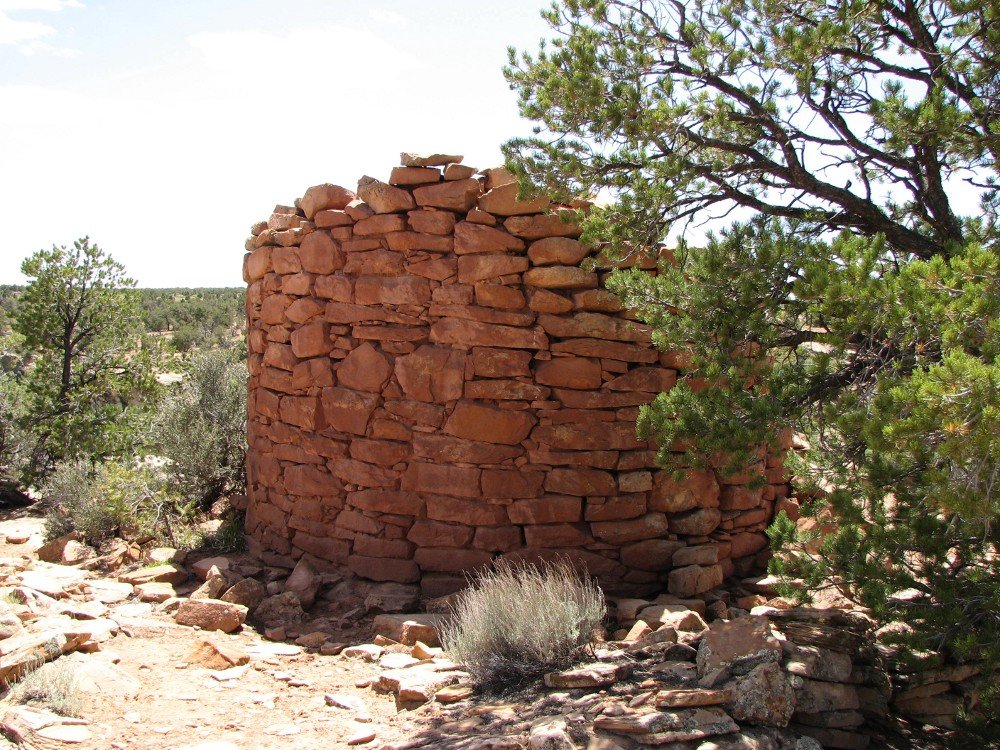